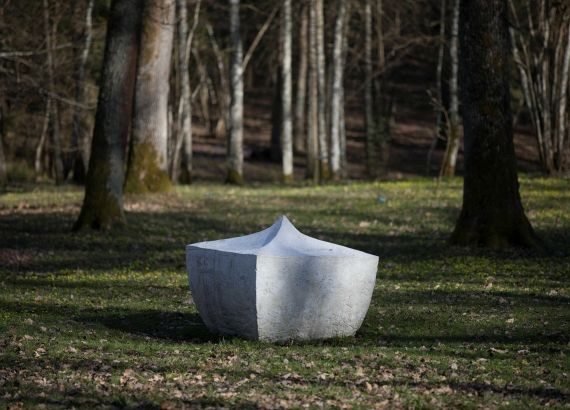 Gintaras Karosas is the founder of the Park of Europe, an independent cultural formation encompassing sculpture, architecture, landscaping, photography, the art of ideas, texts – and management. As an individual artist, Karosas uses all of these media for his own artwork, but the creation of the park, as a cultural space, is his overarching goal. This ambition is reflected in a new piece from Karosas that carries the title Culture. These days only few would risk launching a monument to culture in the lap of nature. But this is exactly what Gintaras does during his entire creative life – he is transforming nature into culture. At the same time, he integrates culture into nature, always looking for a compelling, viewer-engaging relationship.

The first sculpture of the park is a “lily” of white concrete, a site marker of abstract form, featured in the logo of the place. Its erection in 1991 marks the beginning of his park. It existed as an idea prior to that, since 1987. According to Karosas, one opportune shot in the arm came in 1989, with the report of Geographical Institute of France of their calculations that the geographic midpoint of Europe is located nearby Karosas’ country house in Joneikiškės village (20 km off Vilnius). In 1993, still a student of his final year, Karosas organized, in that location, a first international sculpture symposium, and invited ten sculptors from Greece, Finland, Armenia, Hungary, Norway, the USA and Lithuania, most of them about to graduate from their respective art academies. Since then, such symposiums were held annually, the geography of the participants has been expanding, and the quality of their work grew. The park has become a site for some large scale work, by the artists like Sol Le Witt, Magdalena Abakanowicz, Dennis Oppenheim. Gintaras was involved in selecting the location and the realization of these pieces. At the beginning Lithuanians were cautious, if not hostile, towards the emerging new cultural phenomenon. Before the first symposium was held, Karosas received a negative assessment of his graduation project and was expelled from the Academy. The young artists who started participating in organizing international projects were viewed like being too radical (Gediminas Urbonas and Deimantas Narkevičius also failed to defend their diploma projects). Shortly, however, the school realized that its best students held no diplomas of the school, which was not a plus for either the academy or the young artists. Thus all were invited back and defended their graduation projects. With a lot of persistence and determination, Karosas not only turned the Park of Europe into an impressive outdoor museum, listed by the Independent as number 30 on its 2005 list of the sites of art, but also has obtained the opportunity to realize his own ambitious ideas for large scale work. The appreciation and support coming from outside helps the artist to move forward: in 1995, Gintaras Karosas was among those 20 young people, recognized by the Wall Street Journal as key contributors to important changes in Central and Eastern Europe. As the result, the Lithuanian artist received a grant from the United States Information Agency to visit the leading museums in the USA. Travel to the artist not only offers valuable experience for the creation of his outdoor museum, but stimulates him as an artist to produce new works. The artist does not accept invitation to take place in the symposiums abroad, claiming that he wants to create his work in Lithuania. The artist feels that the creation of the park and sculpture pieces is his mission of glorifying Lithuania. These are not just big words. Recently the sculptor is paying more attention to the cultural heritage (the Liubavas Manor watermill was restored through his efforts), but this does not diminish his need for artistic creation.

Since 2000 he is seen to shift from objects to complex architectural-social projects where besides scale, the relationship of internal and external space comes into play, also, the engagement of the audience, and the investigation into memory. His works at this stage are variations of architectural localizations in nature (the Education Centre of the Park of Europe). Such is his most recent work Culture, built of multiple marble pieces. The abstract organic forms of the Culture are reminiscent of Gaudi’s architecture, of seaside rocks and of the structures of ancient civilizations. The sculpture piece of gigantic scale, which took a long time to build, creates natural culture and cultured environment. This work is a testament to the artist’s ecological hearing, essential not only for landscaping and creating the Park of Europe, but for enlarging, each day by a small fragment, the house of culture.
contacts
Europos parkas, Europos Parko g. 300, Joneikiškės, Vilniaus r.