Europos Parkas: A Forest of Art for Dreams and Dreaming 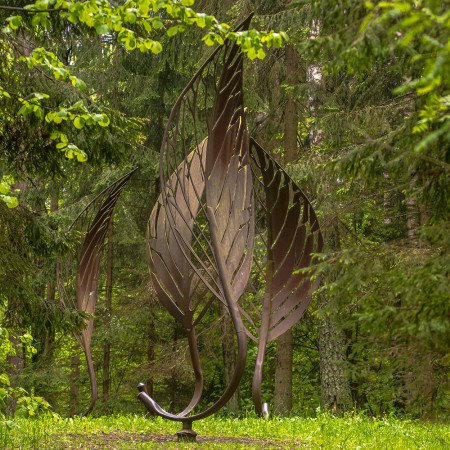 The very beginning of Europos Parkas is 1987, when the idea was just born. This is the time when a wooded place on the outskirts of the capital was discovered for the future art space, a time full of the young artist’s reflections, dreams and determination to realize them. In 1991, the first sculpture was created and the symbolic cornerstone was laid. In 1996, a project by a world-famous American artist was already implemented, and by 2004 a dozen international sculpture symposiums were held and more than one impressive work of art created in the carefully shaped natural environment of the museum.
The open-air museum has been gradually changing and taking shape over a long period of time. Gintaras Karosas, the founder of Europos Parkas, says: “It takes time to create the spirit of the place or the aura of the landscape because you have to get to know the place first and then nurture it for years. Almost all the works have been moved from their original locations to other spaces in the park. As the number of works grows, the relationship among them becomes especially important: the exhibits can reinforce or, conversely, disturb and obscure one another” says the artist, who is also the author of the entire landscape of the museum.
Europos Parkas as the first NGO museum in Lithuania
Europos Parkas was the first this kind of museum in Lithuania after the restoration of the state’s independence. According to Gintaras Karosas, “The idea of Europos Parkas is broad, connecting, bringing together and communicating. On the eve of the park’s birth, Lithuania was still isolated. It was crucial to connect Lithuania with the world. To create a new image for the country, presenting it as inviting and very important. In the post-communist world, having a space for good art is likely to be an ambitious but necessary project”.
Throughout its existence, the park has been gradually and naturally changing, while keeping its original clothes, the basic idea behind it. Creating and maintaining the harmony of nature and art is essential here.
The consistently developed idea of the contemporary art space and belief in it has resulted in an exceptional museum, with its multicultural collection of contemporary art and works of the world’s most famous creators, harmoniously adapted to the natural environment. Recognised worldwide and distinguished by impressive works of art and a special atmosphere unique to this place, Europos Parkas remains a unique opportunity for everyone to experience this world of art and nature.

To celebrate the 30th anniversary of the successful existence and operation of Europos Parkas, two new publications were published together with the publishing house Terra Publica: one for children and the other for adults, anyone interested in contemporary art.

Dedicated to the 30th anniversary of Europos Parkas, the publication A Forest of Art for Dreams and Dreaming is like a retrospective review of a film from a historical camera, capturing the most important stages of creation and development, reflections and the most memorable events.

In the book’s preface, Gintaras Karosas mentions: “To me, the combination of words Europos Parkas sounds like anyone saying my first name and last name. More than thirty years have been dedicated to its creation or, to be more precise, to the creation of Lithuania. After all, it is like a mosaic made of our meaningful actions within it.”

Often asked about how he has managed to create such an object from an abandoned forest, with neither economic opportunities nor state support, Gintaras says he was just running his life project without compromise, devoting all his time and energy to it. “I wanted to pass on the faith in the meaning of such work for the good of Lithuania to other like-minded people and team members, without whose hard work Europos Parkas, as it is now, would not exist.”

Pokalbiai apie meną Europos parke (Conversations about art at Europos Parkas), the other new publication of the museum, is a fun book for children that invites them to travel through the world of art located in Joneikiškės, together with a fun character – a rabbit. Every family with curious and creative children will find something interesting in the new educational book prepared by Europos Parkas, the Centre of Europe Museum.

This children’s book by Europos Parkas enriches a walk around the museum. It provides a lot of interesting information and fun tasks for the little ones. The book also contains a map of the museum and a recommended route. At the end of it, you can find a glossary of terms and answers to the tasks.

Opportunity to experience the harmonious world of art and nature

Since its foundation, Europos Parkas has welcomed famous artists from all over the world, art critics and presidents. The park has hosted many art events, heard many applauses and poetry and saw many dances and performances. Many Lithuanian and foreign journalists have visited. The museum has been captured in films and mentioned in various TV reports and publications.

Gintaras Karosas, who has devoted most of his life to creating and nurturing Europos Parkas, says: “Things that are unique or generally have value are not easy. People who achieve something in science or art go through a lot of challenges and failures, and that path is not easy. In this case, creating a park is the path of a novice. If you knew how much work awaits you in the future, you might not take it, but when you don’t know, the choice is determined by the consciousness, ability and genetic information of the creator. For reasons that you are in control of and that are beyond your control, you are the way you are and you take one way or another.”

Everyone is invited to discover, to see with their own eyes what the idea of Europos Parkas that arose thirty years ago has turned into today. For some, the museum becomes a favourite place to return to, as if to a familiar cosy past, which is constantly renewing itself. They come back to rest, recover, rejoice and witness the developments in the park, in the world and in themselves.

Individual visitors, families and friends regularly come for a walk around the open-air art museum. Students come to take part in educational programmes, groups come for excursions and those who want an individual experience come to experience slow art. Here, everyone finds what they need the most, has a rest, gets inspiration and new energy.
The project ‘Europos Parkas – 30’ is financed by the Lithuanian Council of Culture.